Ngooni: a Twin for Tronox 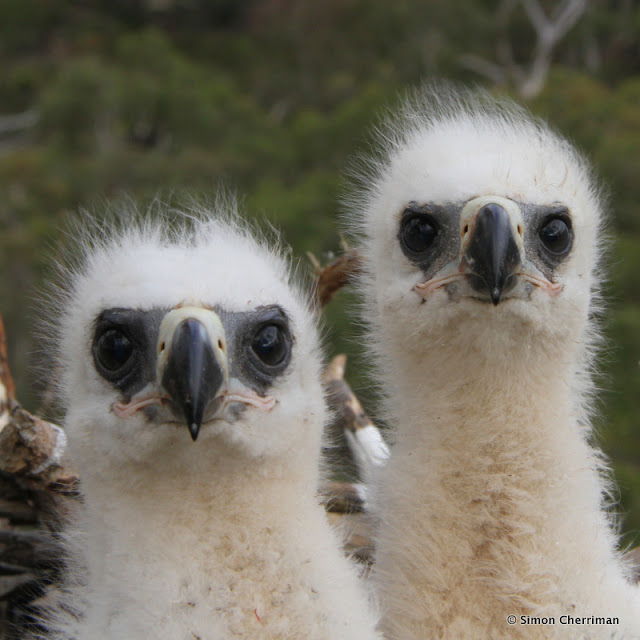 Today's EXCITING news is that Tronox (key sponsors of Baakininy, a female whose transmitter dismounted in 2019) in collaboration with the WA Department of Biodiversity, Conservation and Attractions' Perth Hills District, are now supporting Ngooni's ongoing travels! Ngooni is the eagle pictured on the right of the first two of this post's images. You might remember the above beautiful brood of 'twin' Waalitj / Wedge-tailed Eaglets from September 2017? Only a handful of Wedge-tailed Eagle breeding pairs rear both eaglets to fledging age, and the parents of these two fluff-balls was one of them. 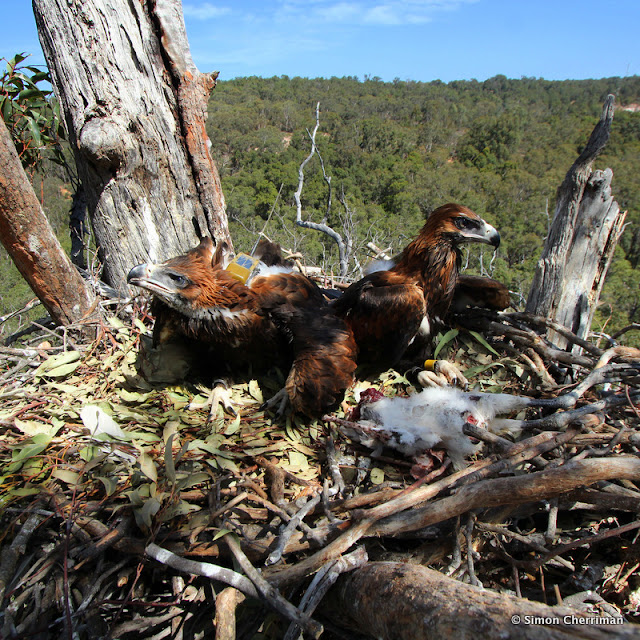 A return visit to their eyrie in late October 2017 saw both male eagles, who had transformed into healthy juveniles, fitted with GPS/Satellite transmitters, when they were also given beautiful Noongar names: Ngooni (brother) and Naakal (quiet one). Both birds dispersed widely into the arid and tropical zones of Western Australia, spending months wandering this vast landscape. Ngooni left the Perth Hills in May and moved to the Pilbara coast for some months, as shown in the below map (left, click to enlarge): 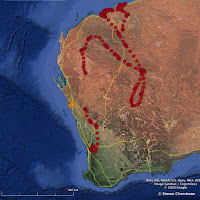 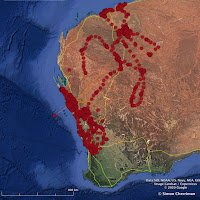 He then continued his wandering journey, travelling south-west from the Pilbara coast to the Murchsion River and west coast near Kalbarri in September 2018, where he has spent most of his time since (above map, right). 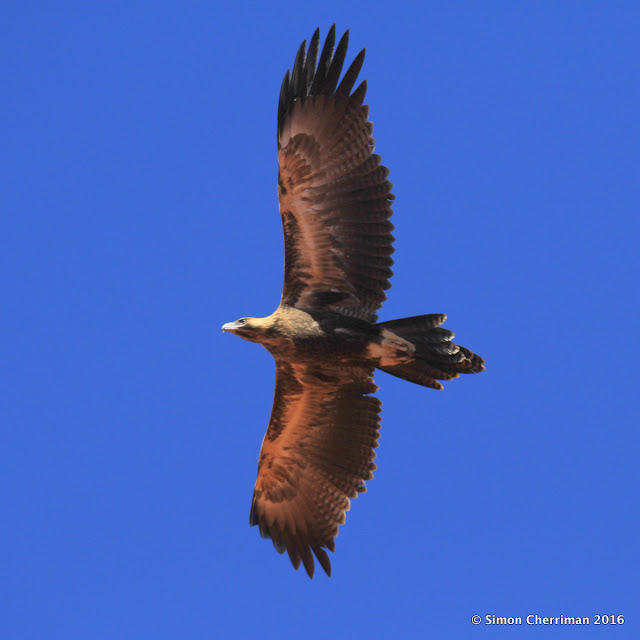 Ngooni now looks much like the eagle picture above: a powerful predator with characteristic juvenile banded markings on his primary and secondary feathers, and overall 'golden' plumage. Ngooni has travelled thousands of kilometres during his first 2 years of life, and is likely to continue to move widely, and thanks to amazing technology (both tracking and the internet's ability to help us share information as widely as these birds move) we will be able to follow him! You can visit my Instagram page and search the hashtags #Ngooni for more updates of this west coast eagle's journeys. Will he make it all the way to the MCG!? :)
Posted by Simon Cherriman at 20:23 No comments: 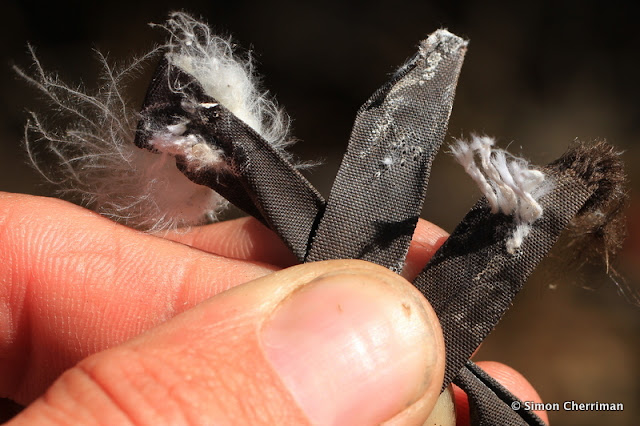 Yesterday I drove with nervous haste to a location ~100km south of Mundaring, where I had detected a cessation in movement from Baakininy’s transmitter late on Friday night. This was the 11th time since 2013 that such a scenario has arisen with Wedge-tailed Eagles tracked as part of my research, and on all previous 11 occasions, either me or a person volunteering to assist with on-ground check-ups had been saddened to locate a dead eagle. Given that Baakininy’s position was only a few kilometres away from where I locaed the carcass of Djoorabiddi, a bird killed in suspicious circumstances in January this year, I prepared myself for the sadness that comes with finding yet another eagle with whom I had become so familiar, dead...

The GPS led my good friend Jeff and I to a small patch of bushland surrounded by sheep farming paddocks. I scanned the scene for feathers blowing in the wind, and sniffed the air for the all too familiar scent of death. A tall, dead Marri tree, ideally suited to eagles for a perch, loomed ahead. The metres counted down. Ten. Eight. Five…  and suddenly, Jeff picked up a tattered piece of neoprene on the ground. THEN… I saw the transmitter, with harness attached, frayed at the weak link. But no eagle in sight. We checked the area thoroughly, but nothing. Not even a feather. 537 days after we satellite-tagged Baakininy in Gidgegannup, and after following her 10, 000km + journey throughout this vast land, our part in her journey has come to an end. She had shed her harness, with both the weak link and our connection to her epic travels cut… but this magnificent creature lives on, free to fly another day! 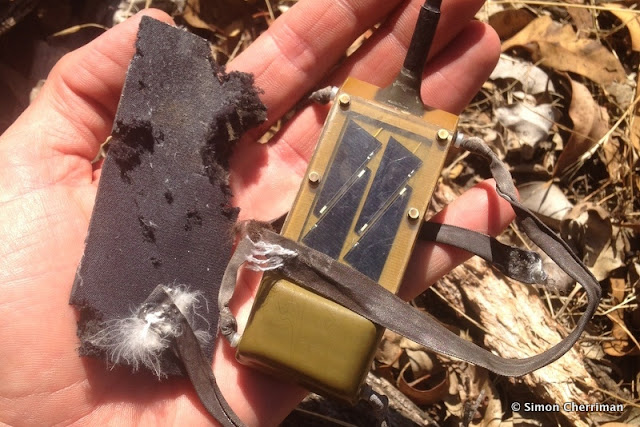 Since our last update, there has been little to report in her movements. She had remained relatively sedentary in a area less than 10 km in diameter, just east of North Bannister at the edge of the WA Wheatbelt/State Forest Boundary. From our observations made yesterday, a number of other equal-aged (2nd year) wedgies have been frequenting this area, perhaps an indicator of ample food supply for these non-breeding birds. Some photographs of two of them can be viewed on my Instagram and Facebook pages, and although neither is our Baakininy, they give a good idea of what she now looks like.

The valuable data collected by this remarkable eagle will make a significant contribution to my research, and I’d like to thank Tronox and Parks and Wildlife for their sponsorship of this bird. I’ll be posting more updates via social media channels in the coming days, so please keep an eye out!
Posted by Simon Cherriman at 02:20 No comments: 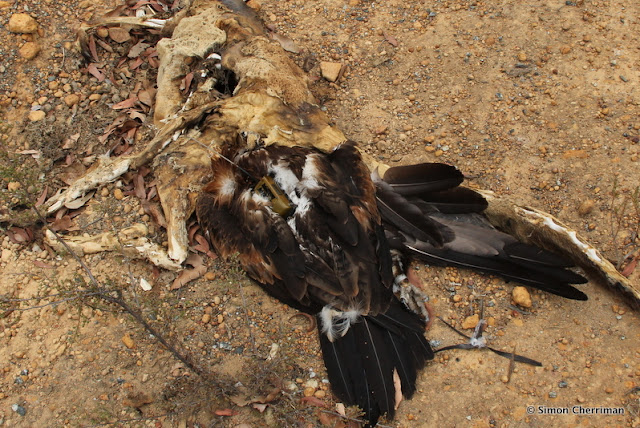 It was devastating today to confirm the stationary signal Djoorabiddi's transmitter had registered over the past few days was indeed the result of his death. I took the above picture of him and the dead kangaroo next to which he was found, yesterday. This shows the scene as I found it, and it features several suspicious 'items' which point to the death not being an accident. For one, the dead kangaroo on which Djoorabiddi looks to have been feeding on is weeks old. Also, his PTT is upside-down, and the harness has been cut off and left next to the carcass. More will be revealed as investigations into Djoorabiddi's death, including x-rays and a post-mortem, are carried out. Keep track of my Instagram page for the latest updates. RIP you magnificent creature Djoorabiddi. Forever may you soar.
Posted by Simon Cherriman at 05:12 1 comment: 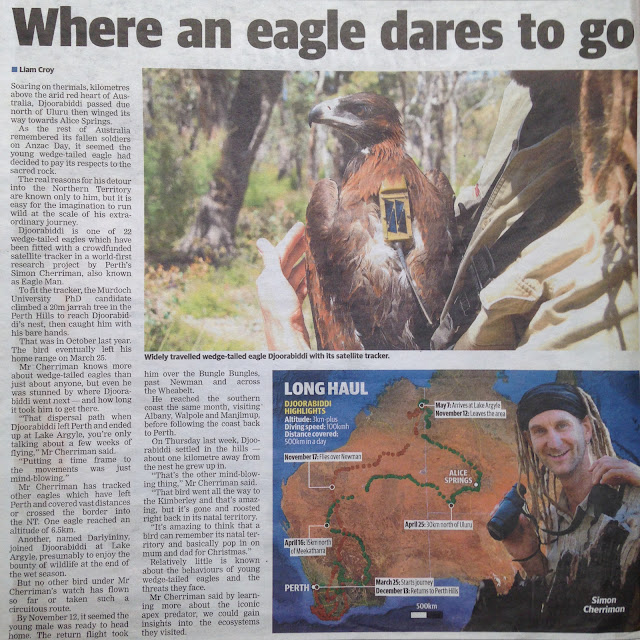 It was very exciting to see Djoorabiddi's Journey feature in the West Australian Newspaper just prior to Christmas. Although it doesn't seem very long ago that I was plucking him off the eyrie in the Perth Hills to fit the transmitter, with camera crew from Channel 10's 'The Project' filming every move, more than 12 months have now passed. Since beginning dispersal in March this year, this remarkable eagle has moved 10, 000km across this vast continent. Click on the above image to enlarge it and read the full article.
Posted by Simon Cherriman at 02:34 No comments:

On Country with Martu on ABC 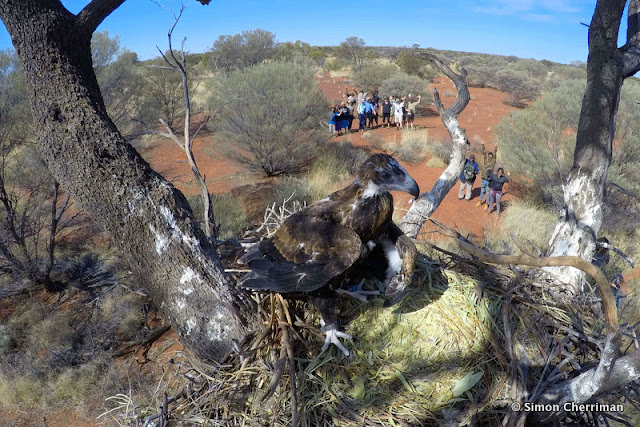 Despite it being a particularly dry year at Matuwa, our recent GEMG-supported field trip to monitor the Wedge-tailed Eagle population was packed full of action as usual! One of the most exciting elements was the filming of some of the two-way science activities carried out by ornithologists, students and teachers from the Wiluna Remote Community School, CSIRO and Central Desert staff and volunteers.

Click here and watch the video put together by ABC journalist Rhiannon Stevens, which gives a fantastic overview of what has now officially become 'Warlu-wurru week.'
Posted by Simon Cherriman at 04:21 No comments: 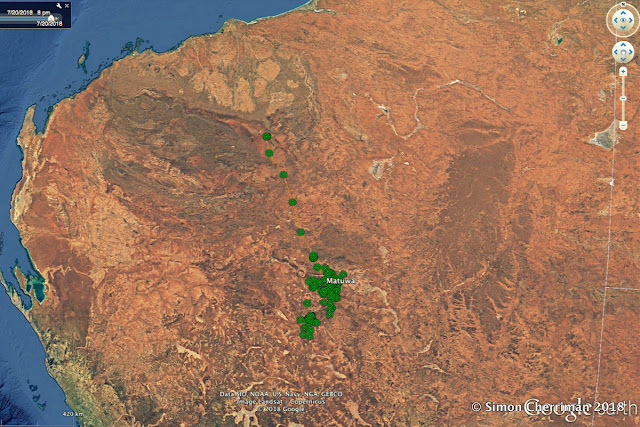 It's been quite a while since we checked in with Kuyurnpa, our longest-tracked Wedge-tail that was satellite-tagged nearly FIVE years ago. My focus on the 2017 and 2018 sample of juveniles, however, doesn't mean that I haven't been watching her tracking data with eagle eyes. The pattern in her behaviour observed when we last read about her movements has not changed much during the last 12 months, with this fifth-year eagle moving between the Carnegie lakes system and the Fortescue Marsh area every few months. Just over a month ago, however, Kuyurnpa made the ~700 km journey south from Roy Hill and roosted close to the northern boundary of Matuwa. Since then, she has behaved 'like a fox patrolling the boundary of a chicken pen', making almost weekly 'incursions' onto Matuwa, sometimes roosting the night, usually in places I know (from our map of eagle nests) are away from active breeding sites.

The below map (click to enlarge) shows one such foray, where she moved from a roost ~20 km north-east of the Matuwa homestead, spending several hours over Lindsay Gordon Lagoon (just south of Kapiburror's nest), before moving off Matuwa again to roosting on the neighbouring property Wongawol. 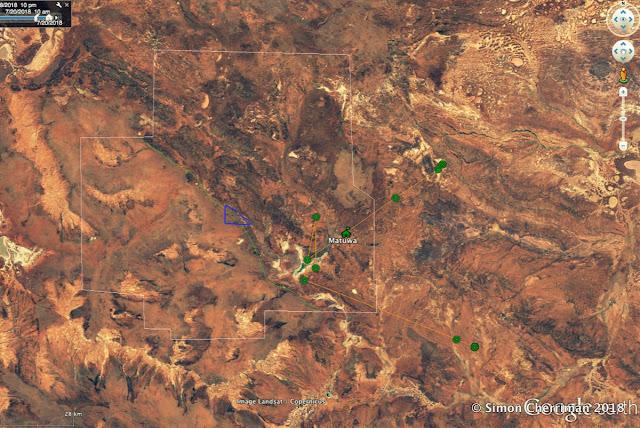 On another occasion (last Saturday), she soared into Matuwa from the south and actually spent the night roosting in a tree under which I have walked, on the southern banks of the same lagoon. This makes July 2018 the month in which Kuyurnpa has roosted within 25 km of her natal nest more times than any other.


It will be so exciting to observe her movements in closer detail over the coming weeks! As we get further into the 2018 Arid Zone breeding season, I'm really interested to see whether Kuyurnpa's seemingly 'desperate' attempts (ok that's a bit too dramatic!) to enter the breeding population continue, and she ends up settling in a breeding territory close to the nest on which, half a decade ago, she came into this amazing world. 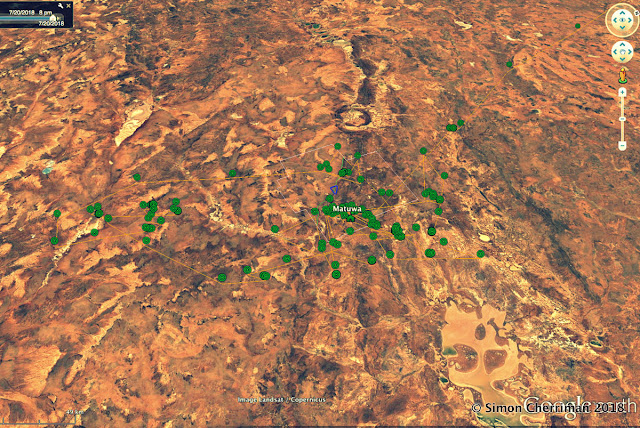 Posted by Simon Cherriman at 03:30 No comments: 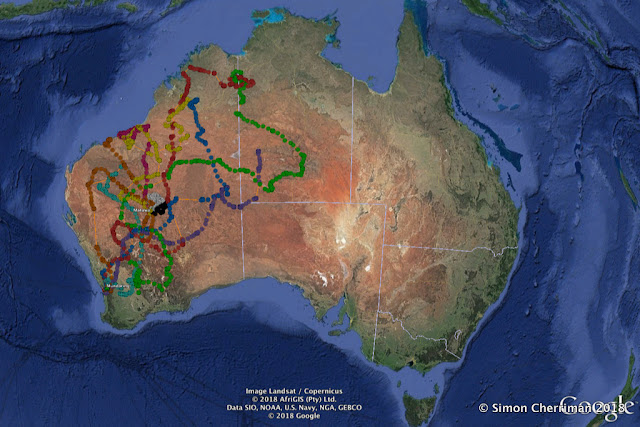 Last week I gave a presentation about my eagle tracking research and preparing for this gave me the opportunity to put together the above map, which shows the recent movement paths of all surviving juvenile Wedge-tailed Eagles satellite-tagged in 2017. It's really interesting that Gudju and Kapiburror (black and white) haven't moved far from their natal home ranges at Matuwa, and amazing how birds like Darlyininy and Djoorabiddi (red and green) have 'met up' in the vicinity of Lake Argyle, thousands of kilometres from their natal nests in the Perth region. I'm looking forward to compiling the data and investigating the reasons (most likely to be climatic/rainfall-related) behind these movements. Currently I'm working on my first PhD paper about the post-fledging and dispersal behaviour of these birds, so I'll post more updates on that as they get off the ground!